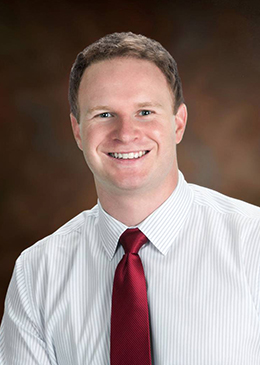 The following is an excerpted interview with Braeden Johnson, MD, a third-year resident at Saint Mary’s Family Medicine in Grand Junction, Colorado. Dr. Johnson spearheaded a project to address the need for greater transparency around costs of care and the elimination of unnecessary care, per the Choosing Wisely® recommendations.

“The intersection of professionalism and the notion of being a good steward of resources fits well with what I’ve advocated for here at Saint Mary’s. It stemmed from working in my clinic or at the hospital and having patients ask me what [a certain test or procedure] is going to cost. I might say, ‘it’s cheap’ or ‘it’s expensive’ but I couldn’t tell them more than that.

So I tried to collect information from various facilities here in Grand Junction—not necessarily for the purpose of publishing them but to get a grasp on what a ridiculous range of prices there are to have the same thing done a half mile away—and then use that in an education piece for physicians. It turned out to be extremely difficult because nobody wants to give up that information; they don’t want anyone to know how much they charge. I had to do a fair amount of backdoor deals and essentially promise these places that I wouldn’t run to the newspapers and publish this information.

I contacted my hometown hospital, a critical access hospital that receives cost reimbursement from Medicare, and whatever Medicare says they’ll reimburse was the best comparison I could give to say, ‘Well, this CT scan is quite expensive‘ or ‘Actually, that’s a very good value that we’re getting here in town.’ My faculty advisor encouraged me to link my findings to some other existing guidelines to be able to not only determine which test is more or less expensive than another but which one is the right one to use. So I paired my data with some of the recommendations from Choosing Wisely and presented at our hospital grand rounds.

I’m not sure some of the older physicians, those retired or newly retired, had a very positive reception to [my presentation]. They weren’t overtly negative—I don’t know if they think that I have some kind of youth idealism—but they were just a little bit pessimistic. The young guns around, people I trained with, seemed enthusiastic and had the idea of, ‘Yeah, this is crazy. Why can’t we find out how much things cost and make the right decision for our patients?’

In my opinion, we should be advertising costs that people want to know. I’m not saying you need to necessarily publish it but if someone picks up the phone and calls, they should get a straightforward answer.

I do understand that ‘price’ and ‘cost’ are different things. I’m a person who still is very much in favor of physicians being in business for themselves but I don’t want our profession to be the butt of jokes like, you go to the hospital and a tab of aspirin costs $20. That’s not transparency. We all know that’s not what it costs and we’re simply shifting numbers around to make our balance sheet look better.

If physicians aren’t going to be the good stewards of our patients financial resources and the system as a whole, then someone else is going to do it for us and force it down our throats. And that’s another nail in the coffin of the independent physician. That’s another breakdown in trust in the patient-physician relationship. I think there’s already a lot of skepticism among patients who feel like they’re not allowed to have certain things done as far as testing and treatment because their insurance won’t let them. I think insurance companies aren’t always to blame. Sometimes doctors aren’t willing to take the responsibility to say, ‘No, that’s not the right treatment for you. That’s harmful.’ They like to stand behind this curtain that the insurance company has put up for us. I think that’s a huge element of professionalism – that we accept the responsibility of having the knowledge that’s needed to do our job as best we can. I don’t know how you differentiate cost from that.

There are many seasoned internists out there who have a very different opinion. They think that cost should play a zero factor in what should be done for a patient in terms of medical management and in some way, I see where they’re coming from when they say the right thing to do is the right thing to do. But that totally flies in the face of the idea of shared decision-making with patients. It’s impossible to have shared decision-making if you’re leaving out key information like price.”