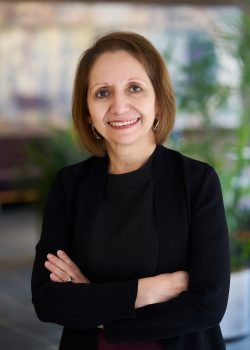 Antonia M. Villarruel, PhD, RN, FAAN, is the Margaret Bond Simon Dean of Nursing at the University of Pennsylvania School of Nursing and Director of the School’s WHO Collaborating Center for Nursing and Midwifery Leadership. As a bilingual and bicultural researcher, Dr. Villarruel has extensive research and practice experience with Latino populations, health promotion, and disparities. Using a community-based participatory approach, she has been the PI/Co-PI of over eight clinical trials on reducing high-risk behaviors in teens. One program, to reduce sexual risk behavior among Latino youth – entitled Cuídate! was disseminated nationally.

Dr. Villarruel holds many leadership positions. She is an elected Fellow of the American Academy of Nursing, and the College of Physicians of Philadelphia; she serves as Chair of the National Academy of Medicine (NAM) Culture of Health Program Advisory Committee, Chair of the Robert Wood Johnson Foundation Health Policy Fellows Subcommittee for the Selection Review Process and Co-chair of the Strategic Advisory Council of the AARP/RWJ Future of Nursing Campaign for Action. She has received numerous honors and awards including the Sigma Theta Tau International Nurse Researcher Hall of Fame Award, the Global Philadelphia Association’s Globy Award for Educational Leadership, and the prestigious Ohtli Award from the government of Mexico. Dr. Villarruel earned her BSN from Nazareth College, an MSN from the University of Pennsylvania, and her PhD in nursing from Wayne State University. She is a registered nurse in both Michigan and Pennsylvania.